Green Mantis 「翠緑の蟷螂 Suiryoku no Tōrō」 is one of the squads of the Magic Knights renown for their highlighted importance of the artistic value of their magics, a field of fame that came about under the rule of Iolo Goch, a particularly famous Magic Knight revered throughout Clover for his versatility in his musical expertise. Though they are a member of the military forces of the Clover Kingdom, the Green Mantis differ from other squads in that have a heavier focus, rather than being invasive, are tasked with magical research and to advance the knowledge and grasp of magic of the Clover Kingdom.

Like the other eight squads, Green Mantis follows the orders of the Magic Emperor and will act according to his requests.

Green Mantis is led by a captain with authority over the members of the squad.

Base of Operations Edit

Green Mantis operates out of a massive tree known as Great Gaia. Created by a combination of Iolo and Cicero's magic. 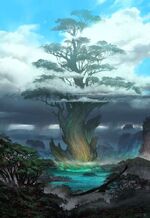 Retrieved from "https://blackcloverfanon.fandom.com/wiki/Green_Mantis?oldid=7248"
Community content is available under CC-BY-SA unless otherwise noted.