Agni (アグニ Aguni) is a 2nd Class Intermediate Magic Knight of the Crimson Lion squad. He is from Wingston, a Peasants village within the Clover Kingdom. Vulcan the spirit of lava, choose to serve Agni after he finds his scroll in a dungeon. His nickname is Red which only the Crimson Lions call him.

Agni is a tall, muscular man with red hair and amber eyes. His red hair is kept short, ruffled, and spiked, with two strands of hair near the opposite sides of his head falling over his face, as well as distinct sideburns. As a teenager, his hair, while still short and ruffled, was messier and his bangs fell across his forehead. Since at that age, there have been light creases under Agni eyes, which he still has.

He wears a black, leather jacket with a fur collar and a white V-neck underneath. He wears dark blue, denim jeans held up by a simple brown belt, with a silver chain attached from the belt to his back pocket, additionally with black shoes to top off the rest of his outfit. Agni wears other jewelry pieces with his clothes, primarily silver: a silver ring, and a star-shaped necklace. He also has a piercing in his left ear.

Agni can be compassionate and supportive if he is use to his surroundings and friends.  Agni can be very violent and get into fights because of his instincts. He likes to yell when people think he can beat him or if he is in an argument. But he also supports his friends and tries to encourage and help them in any way possible. He is also very free-spirited.

In battle, he likes to watch his opponents so that he can formulate strategies so he can what is the right spell to use. When others are around he likes to talk with them so they can help him with his strategies. It doesn't matter what is going on he makes sure that no allies or innocents will be caught in the crossfire if he decides to let loose.

Born in a village in the forsaken realm Agni was raised beside his two younger twin brother and sister. He was born to a Earth mage which is his Father and a Fire mage which is his mother. He was born five years a part from his siblings. His father became a magic knight three years before Agni got his grimoire. During that time his family had found out that Agni had a large mana pool and the deiced he should join the magic knights. Later they had moved into the common realm to be closer to his father.

Agni had deiced to train his magic power to grow and join a royal magic knight squad like the Crimson Lions or the Silver Eagle. During this time he has travled to the noble realm with his Father and had meet Órla Miotaila and Ogun Miotaila clover nobles, Órla uses Gold magic and Ogun uses Titanium magic. Their family is full of metal magic users. During their meet up between their fathers as they are both magic knights and they are in the same squad and wanted to get to know each other better.

During the meet up Agni and Órla and wanted to become magic knights together and that day the declared that they where rivals. One year later after both Agni and Órla get their Grimoires that both take the magic knight exam and both pass. Órla was accepted into the Golden Dawn while Agni got into the Crimson Lions.

After being accepted into the Crimson Lions Agni is sent in a mission into a dungeon near the spade kingdom with his fellow Crimson Lions members he find the scroll of the spirit of lava and whose chosen to be the next user of Vulcan the spirit of lava. While in the Crimson Lions he gains a nickname which is Red do to his red hair and magic. He stills visits his family and goes on mission with his father. The rivalry between Órla and Agni has grown and they both push each other to become stronger.

Lava Wave
Add a photo to this gallery 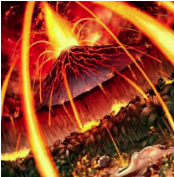 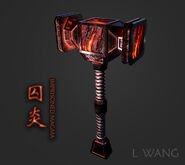 Lava Wave: Eruption plume
Add a photo to this gallery

Mana Skin
Add a photo to this gallery

Retrieved from "https://blackcloverfanon.fandom.com/wiki/Agni?oldid=13284"
Community content is available under CC-BY-SA unless otherwise noted.